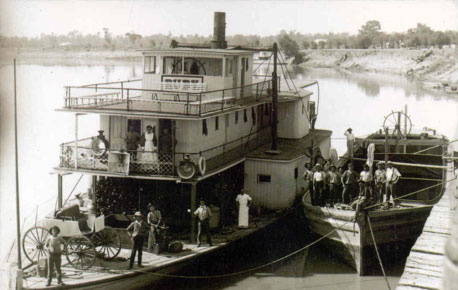 Built at Morgan, S.A., in 1907, she was the 4th paddle-steamer to be called ‘Ruby’. She transported passengers and cargo between Echuca, Mildura, Wentworth and Goolwa. After a long and busy life, Ruby slowly fell into disrepair, ending her days as a houseboat at Mildura.

In 1996 a Restoration Committee was formed from representatives of local organisations and the Wentworth Shire Council. Six years and 1000’s of volunteer hours later, Ruby had a brand new hull and she was returned to water in a dock pond. Excitement grew as the steam engine became operational. She was all steamed up for her 100th Birthday in 2007. Restoration work takes place on PS Ruby on various days. The workers welcome visitors on board our steamer to see their progress – you will be amazed!